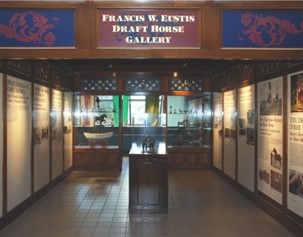 The draft horse has played a pivotal role in the agricultural and industrial history of mankind. This exhibit contains decorative horse tack, polychrome wood carvings, and historical photographs that illustrate the changing role of the draft horse over time.

Throughout the 18th and early 19th centuries, horses in America were used primarily for riding and pulling light vehicles. Although two draft type horses, the Conestoga Horse and the Vermont Drafter, were developed in the new nation, both were absorbed into the general horse population by 1800. Oxen were the preferred draft animal on most American Farms. They cost half as much as horses, required half the feed and could be eaten when they died or were no longer useful. Oxen, however, worked only half as fast as horses, their hooves left them virtually useless on frozen winter fields and roads, and physiologically they were unsuitable for pulling the new farm equipment developed in the 19th century. The revolution in agricultural technology, westward expansion, and the growth of American cities during the nineteenth century, led to the emergence of the draft horse as America’s principal work animal.

AMERICA BECOMES THE WORLD’S BREADBASKET: THE REVOLUTION OF AGRICULTURAL TECHNOLOGY 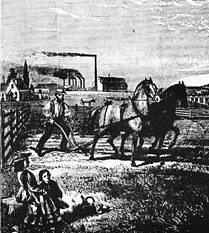 The revolution in agricultural technology between 1820 and 1870, created a demand for a larger and stronger horse to power the new equipment. In 1862, Congress passed the Morril Land Grant Act which led to the establishment of state agricultural colleges. The first of the nation’s veterinary colleges opened at Cornell University in 1868. As farmers became more educated, there was a corresponding improvement in the care, feeding and breeding of horses.

The new and improved farm equipment greatly increased the productivity of the American farmer. With the McCormick reaper, which both cut and tied grains into stocks, one man could do the work of thirty. New steel plows, double-width harrows and seed drills, mowers, binders, combines and thresher’s decreased the need for manpower, but increased the demand for horsepower. Toward the end of the century, the typical Midwestern wheat farm had ten horses, which each worked an average of 600 hours per year. During harvest, it was not unusual to see giant combines pulled by teams of over forty draft horses.

With the use of new equipment and fertilizers, wheat yields increased seven times between 1850 and 1900. Better rail and steamship transportation opened new markets in America’s growing cities and in Europe. America was coming of age as a world agricultural power. 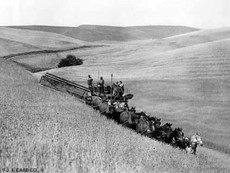 The average American farm in 1790 was 100 acres. This figure more than doubled over the next 60 years. By 1910, 500 acre wheat farms were not uncommon. While oxen and light horses had been adequate for tilling the long-worked fields of Europe and the eastern United States, a stronger power source was needed to work the sticky, virgin soil of the American prairie.

As a result, the first European Draft Horses were imported to America in the late 1830’s. Farm labor became scarce due to westward migration and casualties from the Civil War. This created a greater demand for the new farm equipment and draft horses to power them. By 1900, there were over 27,000 purebred Belgians, Clydesdales, Percherons, Shires, and Suffolk Punches in the United States. Although the purebred draft stock was seldom used in the field, the infusion of their blood resulted in a increase of the average horse size to between 1200 and 1500 pounds by 1900.

Affirmed: The Making of a Champion

Black Horsemen of the Kentucky Turf

Legacy of the Horse